In my first version of Dal Bati, I shared Khandeshi style Dal bati recipe which is very common in our house. As it is deep fried I tried typical Rajasthan style baked bati and dal . It tastes awesome. A complete whole meal off course with lots of ghee. 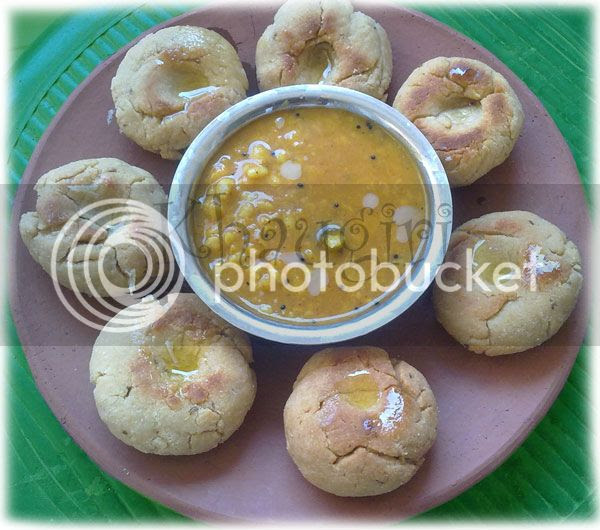 Soak all dal for an hour. After that cook it in a pressure cooker. Make a paste of tomato, green chilli and ginger. Now heat a kadai  and put ghee into it.  Then add cumin seeds and asafetida. After that add  turmeric powder and coriander powder.  Now add tomato paste and sauté it neatly.  Then add red chilli powder and salt. Mix it neatly. Sauté it for 2 minutes.  Now add cooked daal.  Add water as per require for desired consistency.   Boil it for a minute or so. Garnish it with chopped  fresh coriander. Dal is ready.
For Bati
Take all ingredients of Bati in a bowl and mix wel. Now knead a very hard dough with warm water. The dough should not be smooth at all. Cover it with damp cloth. Now preheat  oven on 180 degree Celsius. Meanwhile make small balls of the dough. Press each ball slightly and press with a finger in the centre. So that bati will get cooked properly from inside in oven.  Arrange baatis in oven tray. Brush it with ghee. Bake it for 20 minutes. Turn batis when it gets golden brown colour on one side.
Serving
While serving deep hot baatis in melted pure ghee and serve it with dal. Crush bati and pour dal on bati, mix it and enjoy it.

Vade sguti or Komdi vade is a staple dish of Malvan. Malvan is a town located in Sindhudurg District - southernmost district of Maharashtra. This is a coastal area. By name you must have thought that it must be some snacks or type of crispy Vada. But here Vada is multigrain  puris. We had our Potluck party on last weekend, so my friend Vaishali made vade and solkadhi, and Manasi made special Malvani Chicken curry. I prepared 'kaju curry' for vegetarian people. Vade is a must try dish and vegetarian can also eat it with kaju curry or any other sprout curry. 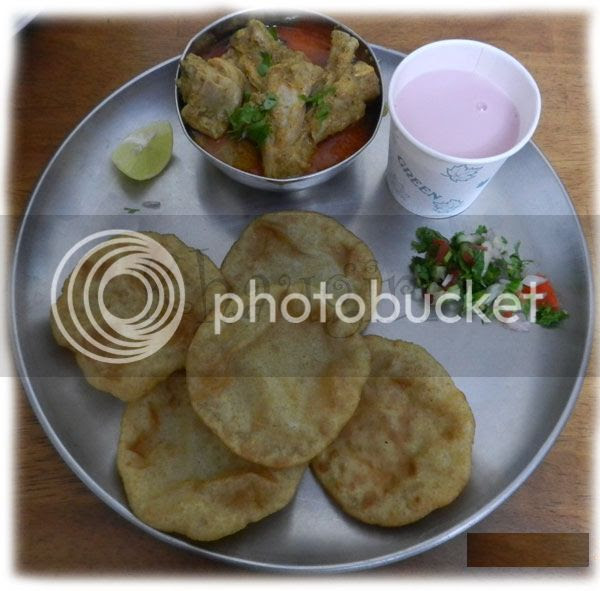 Procedure
For Vade flour
Wash rice neatly. Drain water from it and allow it to get dry overnight. Now dry roast urad daal, chana daal, coriander seeds and fenugreek seeds one by one till it becomes slightly brown. Cool it and mix it with rice and jowar. Grind together in flour mill. Vade flour is ready. Store it in a airtight container. 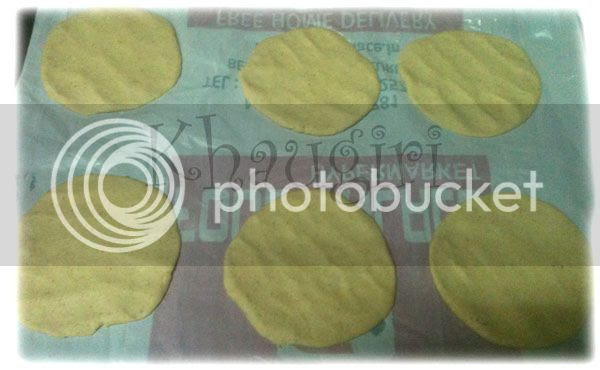 While making vade, take  2 cups of Vade flour, whole wheat flour and salt in a bowl and mix well.  Add 1 cup of  warm water and mix it ( don't knead it) , cover it and keep it aside. After an hour or so knead it with oil and little water and make a firm smooth dough. Now heat oil in kadai. Take a plastic sheet and grease it slightly with oil. Take a lemon size ball of a dough. Make a Puri of it by pressing with palm. Deep fry it on medium flame till it turn to golden brown. Vade is ready to serve. 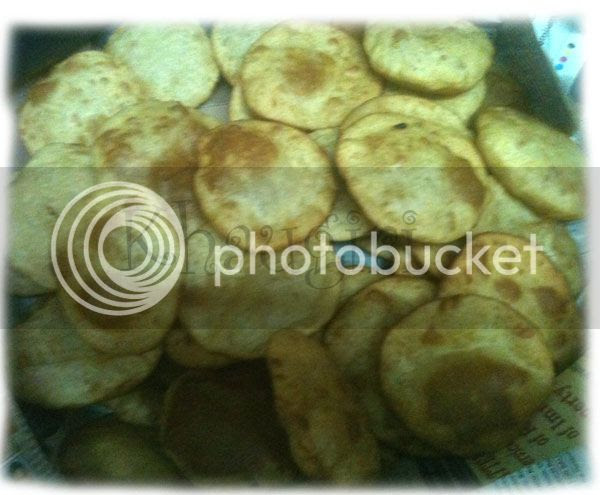 'Katchi Dabeli' …..One more street food…….I think it's originally a Gujarat state's dish but got vey famous in Maharashtra.  It's a type of sandwich. Khatta mitha and very tasty. When we were in Pune , we used to eat it like anything.  But after becoming Bangalorean   it has become difficult to have one dabeli on any street in the rainy eve.  One of my friend Ruchi who used to stay in Pune in her college days wanted to  have Dabeli……so after loooooooong planning we met yesterday and enjoyed homemade Dabeli.  In Pune we used to get  Special Amul butter and cheese dabeli. So I tried making such type of Dabeli and it was yum.  I used readymade 'Siddhi' Dabeli masala. But I have masala recipe which one of my friend had given. I'm sharing that recipe for those who don't get readymade one. For Bangalore people…..you can get  Dabeli Masala in Total Mall. 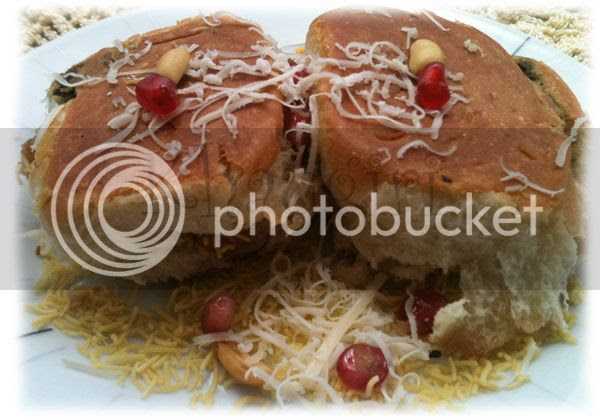 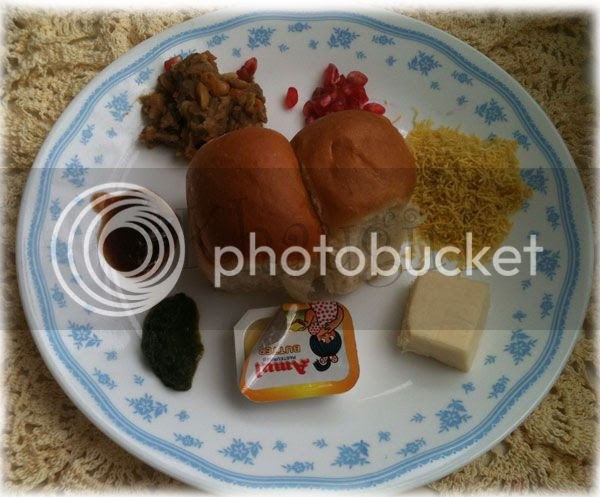 
For Masala
Dry roast corianderseeds, Cumin seeds, Feneel seeds, cloves, cinnamon, red chillies one by one in nonstick pan.  Let it get cool.  Now grind to a fine powder including all other ingredients.  Dabeli Masala is ready to use. Store it in a airtight container.

For Filling
Heat oil in kadai. Now add Dabeli Masala into it. Sauté for few seconds. Now add mashed potatoes and a teaspoon of imli ki chutney. Mix it properly and after minute or so take out of the flame.  Now spread  this mixture in a rectangular dish and top it with roasted peanuts then pomegranates then sev then chopped onion then chopped coriander.


Preparing  Dabeli
Slit one pav just like we do for pav bhaji or vada pav. Now put imli ki chutney on one side and pudina chutney on other side. Now put a spoonful potato filling  with  the topping.  Now close it with the upper portion of the pav. Deep three sides of pav in sev. Mean while heat a fry  pan. Put 1/2 teaspoon butter on it and roast Dabeli from both side with butter till it gets  golden brown color. Press Dabeli while roasting it. Garma Garam Dabeli is ready to serve.  Serve with a grated cheese on top of it. If you like you can add grated cheese in the feeling too.
13 comments: